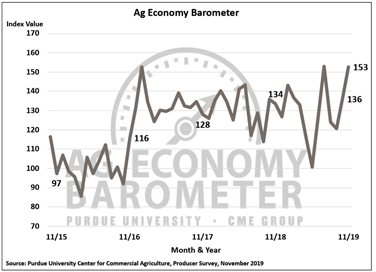 Agricultural economy sentiment in November matched its highest reading of 2019, according to the Purdue University/CME Group Ag Economy Barometer. Rising for a second month in a row, the barometer improved to a reading of 153 in November, up 17 points from October and matching the previous year’s high set in July.

The barometer is based on a mid-month survey of 400 U.S. crop and livestock producers.

Except in the northern Corn Belt, farmers were wrapping up harvest in November, and yields for many farmers were better than expected, which helped boost sentiment, as did optimism that the trade dispute may soon be settled. Meanwhile, cattle prices also rallied since early fall, which bolstered optimism among cattle ranchers and feeders.

Producers’ positivity toward making farm capital investments also improved in November. The Farm Capital Investment Index rose to a reading of 71 in November, its highest since February 2018 and 12 points above October.

This month’s rise in the investment index coincided with a sharp increase in the Current Conditions Index, suggesting that, as producers’ perspectives regarding their farm’s current situation improved, they were more favorably inclined toward making big purchases.

The percentage of producers who expect the dispute to be resolved in a way that favors U.S. agriculture also climbed. In November, 80 percent of respondents said they expected a beneficial outcome to the trade dispute with China, up from 75 percent in October.