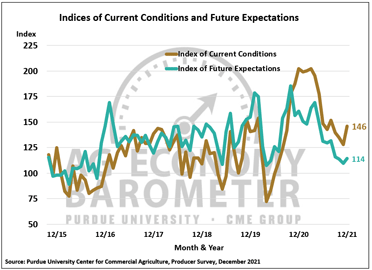 Farmers in December had a more positive outlook regarding their farm’s financial situation. For only the second time since May, the Ag Economy Barometer rose, according to results released Tuesday from Purdue University and CME Group.

Results of the December survey put the index at 125, nine points higher than in November. Both the Index of Current Conditions and the Index of Future Expectations rose. Researchers attribute the increase mostly to an improved perspective on current conditions on farms.

The Index of Current Conditions stood at 146, 18 points higher than a month earlier. The Index of Future Expectations rose four points to 114.

For the third time in a year, the Farm Capital Investment Index rose. The December index climbed 10 points to a reading of 49, the most positive value for the investment index since August but still 47 percent lower than in December 2020.

Compared to November, more farmers now say they plan to reduce their investments in farm buildings and grain bins vs. a year earlier.

Farmers are very concerned about rising production costs and the availability of inputs. When asked what their biggest concerns are for the upcoming year, higher input costs are overwhelmingly the top choice, with 47 percent choosing it from a list that included lower crop and/or livestock prices, environmental policy, farm policy, climate policy and COVID’s impact.