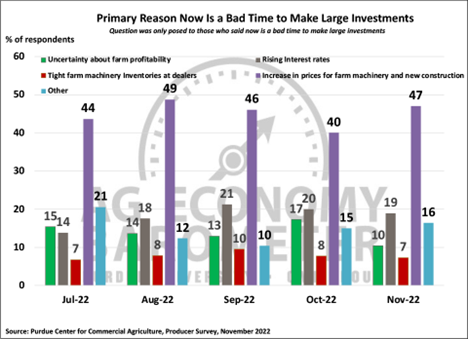 Farmer sentiment was unchanged in November compared to October, with the Ag Economy Barometer Index remaining at 102. This month’s survey was conducted the week following the November U.S. elections but, there did not appear to be a noticeable sentiment swing attributable to the election outcomes.

The Farm Capital Investment Index dropped back to its record low of 31 in November. This month’s decline of 7 points pushes the reading back to its September level, erasing the modest rise in the index that took place in October. It’s become increasingly clear that the index is capturing the perception among producers that this is not a good time to make large investments because prices for farm machinery and construction are high.

This month just 10% of respondents said now is a “good time” to make large investments while 79% said it was a “bad time”. Among the nearly 80% of respondents who said now is a “bad time” to make large investments, almost half (47%) chose “rising prices of farm machinery and new construction” as the primary reason for their perspective.

Looking ahead to 2023, producers continue to cite high input costs as their number one concern. Finally, just over one- fourth of respondents said they’ve made changes in their farm operation in response to a sharp rise in energy costs.