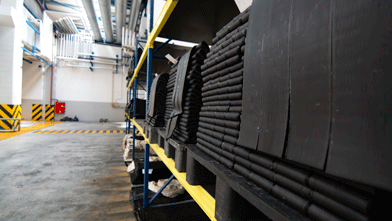 Snarled shipping lines are disrupting the movement of natural rubber, a key material used in tires as well as machine components. With the global supply already running short following stockpiling by China and a devastating leaf disease, rubber prices are on the rise, and some U.S. suppliers are rushing to secure shipments before the market gets squeezed further.

The rubber problems could prove particularly thorny because the trees need seven years to mature, making it unlikely the supply will bounce back.
“It’s like paper towels early on during the COVID crisis,” said Steve Wybo, who heads the auto practice group at consulting firm Conway MacKenzie outside Detroit. “If you can get your hands on some plastic, or some rubber, you’re going to order more than you need because you don’t know when you’re going to be able to get it next.”

For suppliers reliant on U.S. distribution, rubber is already a concern.

“I’ve got everybody alerted that I’ll take materials as fast as they can get it to me,” said Gary Busch, director of global procurement at Carlstar Group, which makes tires for agriculture and off-road vehicles.

Natural rubber is produced from the white sap of trees found in the warm, humid climates of countries such as Thailand and Vietnam. While petroleum-derived synthetic rubber is preferred for some applications, the natural version has properties that are critical for products such as gloves and packaging tapes—both of which have seen demand rise during the pandemic. It is also the critical component in tires and anti-vibration parts under the hood.

Rubber is not the only commodity market finding there’s no easy fix: There could be a copper shortfall of 10 million tons by 2030 if no new mines get built, according to commodities trader Trafigura Group.