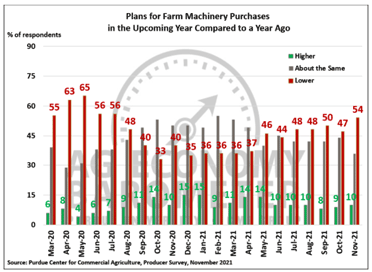 The Ag Economy Barometer from Purdue University and the CME Group slipped to a reading of 116 in November, down five points from October and 30 percent lower than in November 2020.

The Index of Current Conditions declined seven points in November to 128, and the Index of Future Expectations fell four points to 110.

November marked the lowest reading of the year for all three measures of producer sentiment as concerns about sharp rises in production costs coincided with concerns about a host of other issues ranging from prices for crops and livestock to environmental and tax policy and COVID.

The Farm Capital Investment Index declined seven points to a reading of 39, the index’s lowest since April 2020. Weakness in the investment index seems to be a function of supply chain problems along with concerns about rapidly rising input costs.

Since June, each survey has asked producers about their expectations for changes in farm input prices in the upcoming 12 months. Responses to this question have shifted markedly over the last six months.

Meanwhile, the percentage of farmers expecting to see input price inflation exceed 12 percent rose from 18 percent in June to 55 percent in November.

In the November survey, the question was modified to allow producers to choose even higher rates of inflation than on previous surveys. Responding to the modified question, 43 percent of respondents said they expect farm input prices to rise by more than 16 percent in the next year.

Although much of the attention on increasing input costs has focused on this year’s dramatic rise in fertilizer prices, virtually all other input costs ranging from farm machinery to seed and fuel are on the upswing as well. Concerns about rising production costs are contributing to weakness in farmer sentiment.