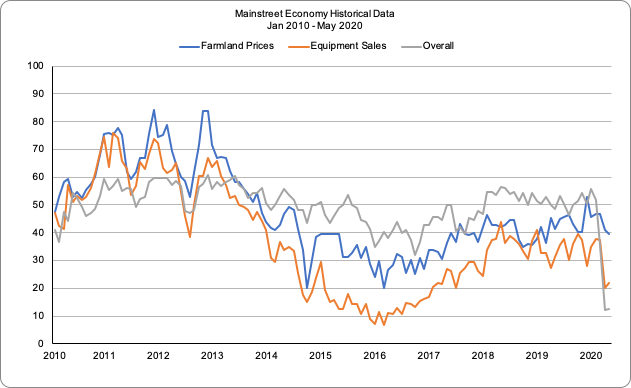 The Rural Mainstreet Index from Creighton University improved slightly in May.

The overall index increased to 12.5 from April’s record low 12.1. It remained well below the 35.5 reading from March. The index ranges between 0 and 100 with a reading of 50.0 representing growth neutral.

The May farm equipment-sales index increased slightly to 21.9 from 20.0 in April.

“Since this time last year, livestock and grain prices have sunk by 19.1 percent and 4.7 percent, respectively. Accordingly, approximately 73 percent of bankers reported restructuring farm loans. As a result of the restructuring, bank CEOs expect farm loan defaults to expand by only 5.4 percent in the next 12 months,” said Ernie Goss, Ph.D., chair in regional economics at Creighton.

In May, researchers asked bankers to assess the Paycheck Protection Program (PPP), and 100 percent of respondents said they consider the program a success. More than one in five bank CEOs supports PPP expansion.

The confidence index, which reflects expectations for the economy six months out, sank to 22.1 from April’s 27.4.

Each month, community bank presidents and CEOs in nonurban agriculturally and energy-dependent portions of a 10-state region are surveyed regarding current economic conditions in their communities and their projected economic outlooks.