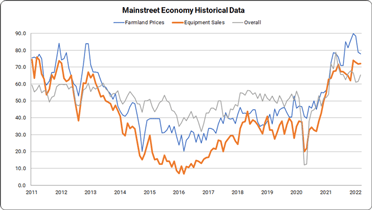 The Creighton University Rural Mainstreet Index (RMI) climbed in March and remained above growth neutral for the 16th straight month, according to the monthly survey of bank CEOs in rural areas of a 10-state region.

The region’s overall reading for March jumped to 65.4 from February’s 61.5. The index ranges between 0 and 100 with a reading of 50 representing growth neutral.

The March farm equipment-sales index increased slightly to 72.2 from 72.0 in February. This was the 16th straight month that the index has advanced above growth neutral. Readings over the past several months are the strongest string of monthly readings recorded since spring 2011.

“A 25 percent gain in farm commodity prices over the past 12 months, near-
record-low short-term interest rates and growing agricultural exports have underpinned the Rural Mainstreet Economy,” said Ernie Goss, Ph.D., chair in regional economics at Creighton.

However, 38.4 percent of bankers expect Russia’s invasion of Ukraine to have negative impacts on net farm income. Of bankers projecting negative impacts, damages are expected to be higher for livestock producers than for grain producers.

Despite Russia’s invasion of Ukraine and accompanying global trade tensions, bankers’ business confidence, which reflects expectations for the economy six months out, advanced to a solid 54 for March, up from 51.9 in February.